To share your memory on the wall of Anneliese Hook, sign in using one of the following options:

Print
Anneliese Hook, age 86, of Chickasha, passed from this life to the arms of her Savior on the morning of August 4, 2020.

Anneliese (Oma), was born in Weinheim Germany in 1933, to an aristocratic family of Germany that did not support Hitl... Read More
Anneliese Hook, age 86, of Chickasha, passed from this life to the arms of her Savior on the morning of August 4, 2020.

Anneliese (Oma), was born in Weinheim Germany in 1933, to an aristocratic family of Germany that did not support Hitler. Anneliese, as a preteen, was sent to a concentration camp when her family was discovered to be helping Jewish people hide and escape the Nazis. She was a survivor of many harsh things in her life, but she was one of the sweetest souls a person could ever meet.

She married the love of her life, Donald Hook, in May of 1960. He was a military man and they were stationed in many places around the world until he retired and they settled in Chickasha Oklahoma in 1981.

Anneliese became a naturalized citizen of the United States of America in 1964, something she was very proud of,
She enjoyed bowling, was an avid gardener and lover of anything that grew as well as any type of animal. She saw herself as a steward of God's creation and did her part to take care of his creatures.

She was a member of the First Lutheran Church in Chickasha.

Anneliese is survived by her sister Hannelore Rebmann of Germany, and by her adopted family here in Chickasha. The King family will miss her presence in our lives as will the countless others that knew her and were touched by her life.

A family ceremony will be held at the Fort Sill Cemetery where she will be laid to rest beside her husband Donald Hook.

Online condolences may be made to www.callawaysmithcobb.com
Read Less

To plant a memorial tree in honor of Anneliese Hook, please visit our Heartfelt Sympathies Store.

Receive notifications about information and event scheduling for Anneliese

There are no events scheduled. You can still show your support by sending flowers directly to the family, or planting a memorial tree in memory of Anneliese Hook.
Plant a Tree

We encourage you to share your most beloved memories of Anneliese here, so that the family and other loved ones can always see it. You can upload cherished photographs, or share your favorite stories, and can even comment on those shared by others.

Plant a Tree in Memory of Anneliese
Plant a tree 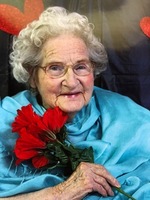