To share your memory on the wall of Billy Walker, sign in using one of the following options:

Billy was born Monday, August 9, 1954 in Lawton, to Billy Marvin Delano and Ima Belle (Davis) Walker. He graduated with the Class of 1972 from the Marlow High School and lived in the area since 1982. He served his country proudly in the United States Army for 20 years in the field artillery and retired as a master sergeant. Billy married the love of his life, Charlene Robertson in Marlow on May 31, 1974. They were married for 44 wonderful years before his passing. He enjoyed coaching his children in little league when they were younger and playing golf. He liked traveling, spending time at the lake with friends and family, and taking care of his yard, but Billy's most loved and cherished time was spent with his family, who he loved dearly.

Billy was preceded in death by his parents, 3 brothers, Ricky Walker, Glen Glenn, Hayden Walker, and his grandmother, Nora Davis.

To send flowers to the family or plant a tree in memory of Billy M. Walker, please visit our Heartfelt Sympathies Store.

Receive notifications about information and event scheduling for Billy

We encourage you to share your most beloved memories of Billy here, so that the family and other loved ones can always see it. You can upload cherished photographs, or share your favorite stories, and can even comment on those shared by others.

Carl & Sheila Mercer, Your Stingray Family, and other have sent flowers to the family of Billy M. Walker.
Show you care by sending flowers

Posted Jan 21, 2019 at 09:17pm
The Vancleave church of Christ wishes to extend its deep sympathy and prayers of comfort at this time to the Billy Walker faimily. We want you to know our hearts share in your grief at this time, and that we trust God to be merciful even as He has promised!
Comment Share
Share via:
CM

Posted Jan 21, 2019 at 09:10am
Please accept our most heartfelt sympathies for your loss... Our thoughts are with you and your family during this difficult time.

Your Stingray Family purchased flowers for the family of Billy Walker. Send Flowers

Posted Jan 19, 2019 at 05:53pm
Most often your cousins are your first childhood friends....... Our thoughts and prayers are with you and all our families, as we remember Billy. 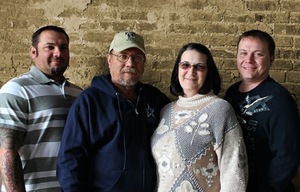