To share your memory on the wall of Delbert Dory, sign in using one of the following options:

Services will be held at 2:00 PM, Friday, March 5, 2021, at the First Baptist Church, with Rev. Ron Maxfield officiating. Burial will be in the Marlow Cemetery under the direction of Callaway-Smith-Cobb Funeral and Cremation Services in Marlow.

Chuck was born Tuesday, February 1, 1921 in Ft. Scott, KS., to Edward and Flossie (Overbeck) Dory. He met Bonnie Maye Shaw, and they were married on October 7, 1944 in Lawton, and they celebrated 71 years of marriage before she preceded him in death on August 14, 2016. Chuck started off working a paper route and selling newspapers on a train, before going to work with his father at a local body shop. He then decided to join the military and served in Korea. After returning from Korea, he worked at La Rence Tank building tankers in Lawton. Chuck reenlisted in the military, but this time, was sent to Japan. He was put on a ship that shipwrecked on the Aleutian Islands for 6-9 months, until another ship rescued them. After serving in Japan, Chuck owned and operated a gas station in Lawton, until he decided to sell it and rejoin the military. Once he was back in, he went to Mechanical and Electronics School and started helping with the fire breaks at Ft. Sill. After his third commitment to the military, Chuck was employed by LTV in Michigan and Grand Prairie, TX., and worked there for about 18 years before retiring. While employed at LTV as an off-site engineer, he went back to school for more electrical training, this time learning heating and air. Upon his retirement, he spent a year renovating a home in Marlow, in which he built the cabinets, snack bar, and several other pieces of furniture. Chuck lived in Marlow for the last 40 years, and was very active in the VFW. He was a Mason for 50-60 years, was a worthy patron, and Treasurer of the Eastern Star, and carried the flag in the 4th of July Parade, for many years. Chuck enjoyed woodworking, tinkering on cars, fishing of any kind at Lake Humphreys and Lake Lewisville, and he loved Harley''s and cars. He will be greatly missed by all who knew him.

To send flowers to the family or plant a tree in memory of Delbert Arnold Dory, please visit our Heartfelt Sympathies Store.

Receive notifications about information and event scheduling for Delbert

We encourage you to share your most beloved memories of Delbert here, so that the family and other loved ones can always see it. You can upload cherished photographs, or share your favorite stories, and can even comment on those shared by others.

Posted Feb 19, 2021 at 01:23pm
Certainly a hero in many areas. Knew Chuck best from bowling days. I know we celebrated several birthdays with him that were 90+ !
Comment Share
Share via: 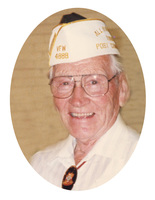