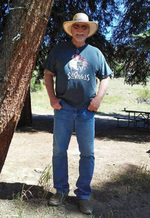 Marlow: Derrel Wayne Epperly, passed away Wednesday, September 30, 2020 in Marlow, at the age of 67.

The family will be receiving family and friends on Tuesday, October 6, 2020 from 6:00 PM to 8:00 PM at the Callaway-Smith-Cobb Funeral Home in Marlow.

Funeral Services will be held at 11:00 AM, Wednesday, October 7, 2020, at the Purdy Cemetery, with Sister Ellen Abshire officiating. Burial will be in the Purdy Cemetery in Garvin County. Arrangements are under the care of the Callaway-Smith-Cobb Funeral and Cremation Service in Marlow.

Derrel was born Sunday, October 19, 1952 in Poteau, to Sherman Epperly and Maxine (Corn) Epperly. He grew up in Bengal, graduating from Leflore High School with the Class of 1970 and attended college at Eastern Oklahoma State College and SEOSU. Derrel married Sherrie Gamble in Fort Smith, who later preceded him in death. He moved to Maysville then to Stringtown for more than 25 years eventually returning to Bengal prior to moving to Marlow. Derrel went on to marry, Mary Sherwood in Fort Smith on September 10, 2001; they were married for 19 years before his passing. Derrel worked as a Unit Manager for the Oklahoma Department of Corrections for more than 27 years before retiring. He was an avid bass fisherman and hunter that enjoyed the outdoors. Derrel loved basketball and watching his grandchildren play softball, football, and baseball. He loved to give his dog Gracie rides in his golf cart. Derrel was always doing for others whether that meant buying meals, sharing his canned vegetables, except his jelly with friends and family, or offering a prayer for them. He was a devout Christian man, who lived his faith. Derrel was a member of the Church of God.

Along with his first wife, Sherrie, Derrel was preceded in death by his daughter, Angie Hicks, and his father.