To share your memory on the wall of Edna Fincher, sign in using one of the following options:

Edna was born to Richard and Cora (Garrison) Cross in Osceola, MO. Edna grew up in Osceola and lived most of her life in Kansas City, MO, but eventu... Read More
Edna Lou Fincher, 92, of Marlow, passed away peacefully on October 18, 2020 in Marlow.

Edna was born to Richard and Cora (Garrison) Cross in Osceola, MO. Edna grew up in Osceola and lived most of her life in Kansas City, MO, but eventually moved to Marlow in 1983. She attended high school in Osceola, and later proceeded to attend Central Missouri State and the University of Missouri in Kansas City. She graduated with a master's degree in counseling, which she put to good use for over 30 years as a counselor and 5th grade teacher, both at the Park Hill School System of Platte County, Missouri and the Marlow Elementary School. On August 9, 1953 Edna married the love of her life, Harold Gene Fincher, in Kansas City, Missouri, and they were together for 34 years before his passing. She was a member of the First Baptist Church. Edna loved to read and learn from her Bible as well as teaching her Sunday School class. She enjoyed spending time with her family, but especially loved having her grandchildren and great-grandchildren over to stay. Edna also liked to spend time with senior citizens and her friends just drinking coffee and playing dominoes.

She is survived by her son, Jerry Fincher of Marlow, OK, her daughter Grace Kenyon and husband Ted of Fulton, MO, 4 grandchildren, and 7 great-grandchildren.

She was preceded in death by her parents and 11 brothers and sisters.

Online condolences may be made at callawaysmithcobb.com

To send flowers to the family or plant a tree in memory of Edna Lou Fincher, please visit our Heartfelt Sympathies Store.

Posted Oct 26, 2020 at 02:00pm
I was so very sorry to hear of Edna's passing. She was my Sunday School Teacher for many many years. She was so knowledgeable of God's word and was always super prepared to teach the lesson and ready for any questions that might arise. I also remember her always calling to wish me a happy birthday. She was a precious lady and she will be greatly missed. I would have attended her funeral but unfortunately I did not hear about the time and location until the date had passed. I'm very sorry I was not there to honor her memory. My prayers are with you all.
Comment Share
Share via:
JP 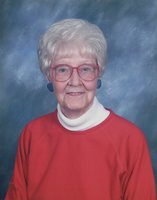