To share your memory on the wall of Geraldine Kaler, sign in using one of the following options:


Jeri was born Thursday, November 13, 1941 in Chickasha to Lester Lee and Rita Lee (Plowman) Roberts. She lived in the Marlow and Duncan area all of her life. She continued her education at Oklahoma University and Oklahoma City University were she earned her Associates degree. She married John Reynolds in Duncan and later married Ben Kaler at Lake Humphrey. She worked for the Stephens County Youth Services as a child care worker for over 25 years. Jeri was an avid gardener that enjoyed planting flowers and gardening. She enjoyed sewing and riding around on the lawn mower with her great-grandson Remi. She enjoyed fishing and camping. Jeri was an advocate for shelter animals and abused children. She donated to the Boys Ranch, Saint Jude's, and Chickasha Animal Shelter. She loved spending time with her family, who were her entire world.

Along with her 2 husbands, Jeri was preceded in death by her parents and a sister, Monte Joyce McCabe.

Honorary Pallbearer will be: Layce Graham.

To send flowers to the family or plant a tree in memory of Geraldine Ann Kaler, please visit our Heartfelt Sympathies Store.

Receive notifications about information and event scheduling for Geraldine

We encourage you to share your most beloved memories of Geraldine here, so that the family and other loved ones can always see it. You can upload cherished photographs, or share your favorite stories, and can even comment on those shared by others.

Mike and Sue Ringler and Karen Ward and Tamie McCabe sent flowers to the family of Geraldine Ann Kaler.
Show you care by sending flowers 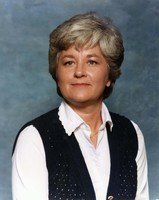