To share your memory on the wall of James Neal, sign in using one of the following options:

Provide comfort for the family of James Neal with a meaningful gesture of sympathy.

Print
Marlow: James Calvin Neal, passed away Wednesday, February 5, 2020 in Lawton, at the age of 93.

Funeral Services will be held at 2:00 PM, Monday, February 10, 2020, at the First Baptist Church, with Rev. Ron Maxfield officiating. Buria... Read More
Marlow: James Calvin Neal, passed away Wednesday, February 5, 2020 in Lawton, at the age of 93.

Funeral Services will be held at 2:00 PM, Monday, February 10, 2020, at the First Baptist Church, with Rev. Ron Maxfield officiating. Burial will follow in the Marlow Cemetery under the direction of the Callaway-Smith-Cobb Funeral and Cremation Services in Marlow.

James was born Friday, April 9, 1926 in Logan, to James Calvin Sr.and Inez (Pounds) Neal. He had lived in the Marlow since 2000 and had graduated from Darrouzett High School in Texas. He earned a Bachelor's degree from OBU. James married his loving wife, Fern Louise Martin in Beaver, Oklahoma on September 13, 1944; they were married for 75 wonderful years before his passing. James worked in Ministry for more than 50 years in numerous small towns in Oklahoma including Davis at Falls Creek. He was a master carpenter that took great pride in building and remodeling numerous churches in which he pastored in. James loved to piddle around his workshop. He enjoyed the outdoors especially hunting, fishing, and golfing.

James was preceded in death by a son-in-law, Frank Russell, 2 great grandson, his parents, and 2 sisters, Vera Vasek, Maxine Nylin.


Pallbearers will be: his grandsons.

Memorial contributions can be made to the Garland Smith Public Library in Marlow or the Ahlzeimers Associations in James's honor.

Lloyd and Treva Martin and Family sent flowers to the family of James Calvin Neal Jr..
Show you care by sending flowers

Lloyd and Treva Martin and Family

Lloyd and Treva Martin and Family purchased the The FTD Comfort Planter for the family of James Neal. Send Flowers 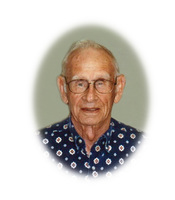