To share your memory on the wall of Joan Ward, sign in using one of the following options:

Funeral services will be held at 2:00 PM, Monday, January 11, 2021, at the Callaway-Smith-Cobb Chapel, with Rev. Randy Southerland officiating. Burial will be i... Read More
Duncan: Joan Blake Ward, 96, passed away Monday, January 4, 2021 in Duncan.

Funeral services will be held at 2:00 PM, Monday, January 11, 2021, at the Callaway-Smith-Cobb Chapel, with Rev. Randy Southerland officiating. Burial will be in the Marlow Cemetery under the direction of Callaway-Smith-Cobb Funeral and Cremation Services in Marlow.

Joan was born Wednesday, October 22, 1924 in Marlow, to Ross and Anna (Smith) Blake. She attended Oak Lawn Schools, and was a 1942 graduate of Marlow High School. Joan met Homer Troy "Pete" Ward, and married him in November of 1943, and they celebrated 43 years of marriage until his passing on March 16, 1986. She was a Civil Service employee, working in accounting and payroll. Joan also served as the Treasurer for the Oak Lawn School Board of Trustees. She had resided in Duncan for the last 25 years, but prior, she had resided in the Lawton and Marlow areas. Joan was a longtime member of New Hope Baptist Church West in Duncan. The things Joan loved the most were shopping, sewing, and spending time with her family.

To send flowers to the family or plant a tree in memory of Joan Blake Ward, please visit our Heartfelt Sympathies Store.

Receive notifications about information and event scheduling for Joan

We encourage you to share your most beloved memories of Joan here, so that the family and other loved ones can always see it. You can upload cherished photographs, or share your favorite stories, and can even comment on those shared by others.

The Newbys sent flowers to the family of Joan Blake Ward.
Show you care by sending flowers

Posted Jan 12, 2021 at 03:55pm
My brother Bob described Aunt Jody beautifully. Her love was felt by anyone who knew her. She was my go-to 2nd mom after our own mom passed away and I have cherished our visits and phone calls over the years. When I told my son that Aunt Jody had passed away, his response was "Did she take her paddle with her?", and I laughed remembering Aunt Jody would say "I still have my paddle, and you're never too old for me to use it on you!"
I rejoice in your heavenly promotion and look forward to the day I see again.
(Pics: Aunt Jody and my children, Aunt Jody holding me, Aunt Jody holding my daughter, Aunt Jody and I, Aunt Jody and Uncle Pete)

Posted Jan 11, 2021 at 12:59pm
Joan was an extraordinary and loving wife, mother, and a dear friend. She was not only the best mother to her daughter but her heart was spacious enough to love and "mother" the four Hagmaier children when times called. We have, to this day, referred affectionately to her as our "Aunt Jody".

Aunt Jody was and will always remain a deeply cherished part of the Hagmaier family and its legacy. Ever-present to help when asked, always there to support all of our childhood and adult milestones, and even deliver the occasional and probably necessary discipline defined Aunt Jody's love and commitment to the Hagmaier family. Without question, she leaves an indelible mark on all of our lives. Our memories of Joan are forever carved in our hearts and minds. She will be loved and missed forever.

Joan, it is only expected that you would go before us ensuring the path is safe. You are with Uncle Pete and in the hands of God, your rightful eternal place. You have always been loved by "your other kids" and will always be held in our hearts as closely as you held us. Godspeed beautiful wife, mother, and dear, dear friend.
Comment Share
Share via:
C

The Newbys purchased flowers for the family of Joan Ward. Send Flowers 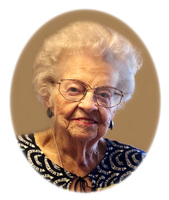