To share your memory on the wall of Leon Couch, sign in using one of the following options:

Graveside services will be held at 2:00 PM, Thursday, March 4, 2021, at the Marlow Cemetery, with Rev. Doyle Sharp officiating.
Burial arrangements have been entrusted to Callaway-Smith-Cobb Funeral and Cremation Services in Marlow.


Leon Whaley Couch was born on April 30, 1932 to Leon Thomas William Couch and Lois Hester Milliron in Bray, Oklahoma. He entered his eternal life on February 27, 2021 at the age of 88. Leon worked as an industrial spray painter for J.C. Lee Company in Sapulpa, from 1967-1985, and then worked at Oklahoma State School for 10 years. He married Sharon Berns on June 24, 2003 in Lawton, and they celebrated 17 years of marriage. Leon enjoyed swinging on his porch swing and watching sports, but most of all he loved spending time with his family. He will be deeply missed by all who loved him.

Receive notifications about information and event scheduling for Leon

There are no events scheduled. You can still show your support by sending flowers directly to the family, or planting a memorial tree in memory of Leon Whaley Couch.
Plant a Tree

We encourage you to share your most beloved memories of Leon here, so that the family and other loved ones can always see it. You can upload cherished photographs, or share your favorite stories, and can even comment on those shared by others.

Posted Mar 02, 2021 at 01:22pm
Leon was such a joy and has always been such a light in all our lives. He was always so warm to us kids. His big booming laugh could fill a room. He was dearly loved and will truly be missed.
Comment Share
Share via: 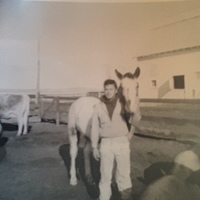