To share your memory on the wall of Marguerite Brown, sign in using one of the following options:

Marguerite was born in Parker Corners, Oklahoma, to the loving union of Alvino and Gladys (Echols) Medrano. They arrived in a covered wagon and made the little town their home. Eventually they relocated to Lawton, where her parents resided for the remainder of their lives.

Marguerite met the love of her life, Troy Brown, in Lawton, Oklahoma after he was discharged from the United States Army. They knew they were meant for each other and were married three weeks later, April 12, 1946, in Guthrie, Oklahoma. They made Oklahoma City their new home and welcomed their first child, a daughter, Thellis Ann. The following year, they welcomed their second daughter, Terra Lee, only to lose her shortly after birth. They stayed in Oklahoma City, Oklahoma, for another year, and Troy enrolled in Okmulgee Tech in Okmulgee, Oklahoma. There they welcomed their third daughter, Tommie Elaine. Upon graduation with a degree in Printing, he was offered a position at Haliburton in Duncan, Oklahoma. While living in Duncan, Oklahoma, they welcomed their fourth child, a son, Hollis Duane. Upon a new job opportunity, Troy and Margaret moved back to Lawton, Oklahoma, where Troy worked for Carter’s Print Shop. There they joined the 8th and Lee Church of Christ, where they met many of their lifelong friends.

Due to Troy’s failing health they sold their business and moved back to Lawton, Oklahoma. As Troy’s health declined; their daughter, Tommie, moved Troy and Marguerite in with her family in Edmond, Oklahoma. After his death, Marguerite relocated to Texas City, Texas to be close to Troy’s sister, Virgie Lewis. She wanted to go back to what she loved which was making her famous hamburgers. She gained employment at K-Mart, doing just that until she retired.

She was a diehard Sooners Football Fan for 73 years! From the “Glory Days of Radio” to High-Definition Television she never missed a game until this past year. She was an avid lover of the 50’s and 60’s music genre. She was singing and dancing in every aspect of her life whether it be in cooking, cleaning or working. She was the family seamstress. Every day she made three amazing meals from scratch (in our eyes, there will never be someone that can make her homemade flour tortillas, enchiladas, Spanish rice, pinto beans and dirty cake.) She had a natural ability to make any flower or plant thrive.

At the families request and in consideration of exposure to COVID-19 private funeral services will be held and officiated by Rev. Dr. Brian Everett. Graveside Service will follow after the private funeral service at the Marlow Cemetery under the direction of Callaway-Smith-Cobb Funeral Home in Marlow, Oklahoma. Streaming services will be available through Callaway-Smith-Cobb FaceBook Page at 2pm on November 9, 2020.

Online Condolences or Words of Comfort may be made to:
www.CallawaySmithCobb.com

To send flowers to the family or plant a tree in memory of Marguerite Attamae Brown please visit our heartfelt sympathies store.
Read Less

Receive notifications about information and event scheduling for Marguerite

There are no events scheduled. You can still show your support by sending flowers directly to the family, or planting a memorial tree in memory of Marguerite Attamae Brown.
Plant a Tree

We encourage you to share your most beloved memories of Marguerite here, so that the family and other loved ones can always see it. You can upload cherished photographs, or share your favorite stories, and can even comment on those shared by others.

Posted Nov 06, 2020 at 03:44am
To the most wonderfully made woman any person would be honored to call their grandma!!! I certainly do miss you. I miss everything about you!!! To the way you put your hand up on your hip and primp you’re hair. The best girl advice: Never go anywhere without lipstick!! Besides being blessed to be your granddaughter...... Thank you for blessing my kids and I with your fabulous dimples!! It all started with your great taste in music. You know how we would turn it on to KOMA and sing to all the oldies!!! Oh, how I loved how to be around you in the kitchen....... Singing and dancing. You actually are the one who gave me my great love for dance, music and OU FOOTBALL (besides my daddy)! Remember when Ann and I went to the OU/Texas Football Game and making a sign just for you to get on ABC (College Gameday with Kirk Herbstreight and Lee Corso) but Ann and I are are so short that some 6’3” guy tried to hold it up for us. He really just should have picked Ann up and put her on his shoulders with the sign!! ! I hope you knew how much your life impacted mine. You were full of love, beauty, grace, joy, spunk, class and the cutest little thing North and South of The Red River! Funniest thing you ever said to Larry besides the wooden nickel joke was when he asked you if you could make chili rellenos and you said, “The caucasian in you wouldn’t let you make those!” We will see each other again because Yeshua/Jesus is our Lord and Savior and I will be waiting for that day when we do. I love you with all my heat. Love, Lee-Lee (Lea) 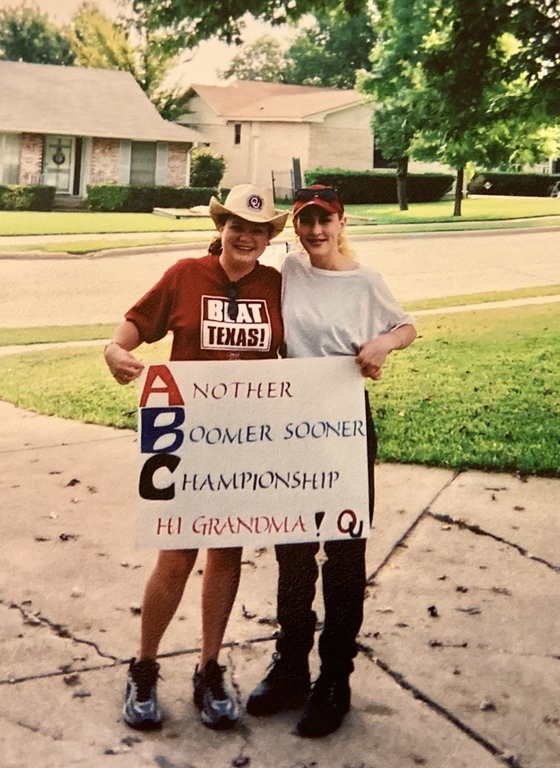 Spelling error at end.... not heat!!! 🤣 but “HEART”!!! Craziness enough..... Ann and I had no idea what each other wrote in our memorial wall posts because they were delayed due to the funeral home approval. We knew our grandmother and that just goes to show that she was every flawless in how she was as a person/mother/grandmother. In addition, Ann and I are so close that even though we never shared with each other what each other was posting but shows an amazing bond between two of her granddaughters. I love both thoughts! Love, Lea ❤️
A

Posted Nov 05, 2020 at 08:42pm
How many times did I hear grandpa yelling at you,” MARGUERITE !” because you were yelling for OU when listening to them play on a little kitchen radio while you were cooking ? TOO many to count! And how many times would I hear you singing and bee-bopping to the oldies on KOMA from that same radio?
Grandma I was blessed to have you in my life for 53 years. And blessed even more to have you long enough for you to see me become a grandmother.
I will miss you. I love you. I hope I uphold your standards every time I make your enchiladas! But as you know,I never could get the Spanish rice right😂 Love, your honeybee, Ann
Comment Share
Share via: 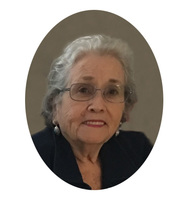