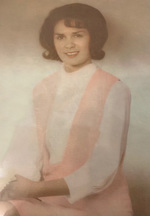 Mary Frances (Gibson) Koontz passed away Thursday, January 23, 2020 in Oklahoma City at the age of 75.
Funeral Services will be held at 1:00 P.M. Saturday, February 1, 2020, at the Cumberland Presbyterian Church in Marlow, OK, with Pastor Terra Sisco and Pastor Dale Nease officiating. Arrangements have been entrusted to the Callaway-Smith-Cobb Funeral and Cremation Services in Marlow.
Mary Frances was born January 12, 1945 in Lawton to Hubert and Ethel (Perkins) Gibson. She grew up in Marlow. While attending Marlow High School she participated in basketball and band. After leaving Marlow, Fran shared her love of adventure with her two daughters by living in places as diverse as Nevada, Virginia, and Texas, to name a few. She also worked for Southwestern Bell and the City of Ardmore.
She went by many names, depending on what stage of her life you knew her. She was known as Mary to teachers and healthcare professionals, relatives and childhood friends called her Frances, and as an adult she was known as Fran. But, her favorite name above all others was "Mimi", as she was known by her grandchildren and great-grandchildren.
Among Fran's many gifts was the ability to recognize the needs of not only family members, but complete strangers, and would take whatever steps necessary to best help them. Conversations with Frances were so engaging that although hours would pass by, it would seem as if it had only been minutes. No matter how dire the situation, she believed that there would be a positive outcome. One thing she always said was, "It will all be okay." She was a wise woman and was sought out by both family members and friends for her keen insights. Fran enjoyed watching CNN, sports, and old Westerns.
Survivors include, her daughters, Kim Arnold and husband Michael of Hobbs, New Mexico, Keli Koontz Clifford and husband Billy of San Tan Valley, Arizona, 3 grandchildren, Michael Koontz and wife Jessica of Noble, Kaitlin Puckett and husband Jacob of Carlsbad, New Mexico, Taylor Arnold of Hobbs, New Mexico, 4 great-grandchildren, Kalester Pitman, Lilibeth Arnold, Eleanora Puckett and Kamile Koontz. She is also survived by 3 sisters, Huberta Bradley of Ada, Renee Gibson of Ada, Sonya Glover and husband Brian of Mustang, 2 brothers, Donnie Gibson of Duncan, and Ronnie Gibson, 9 nieces and nephews, 13 great nieces and nephews, and 2 great-great nieces.
She was preceded in death by her parents, Hubert Gibson and Ethel Gibson, her sister, Marie Tuck, a niece, Tina Tuck, and Zach (her furbaby).