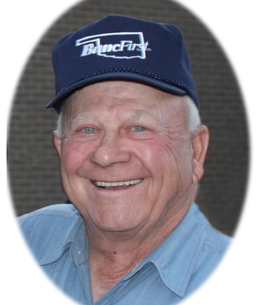 Funeral Services will be held at 10:00 AM, Monday, February 14, 2022, at the Glory Bound Church, with David Woods officiating. Burial will be in the Marlow Cemetery under the direction of Callaway-Smith-Cobb Funeral and Cremation Services in Marlow.

PeeWee was born Thursday, July 5, 1928 in Hulen, to Tom and Gertrude (Roof) Riley. He lived in Marlow most of his life and was known by the entire community. PeeWee married the love of his life, Ella Ree "Babe" Dyer, on July 29, 1948 in Henrietta, TX. He and Babe celebrated more than 56 years of marriage before she preceded him in death on February 22, 2005. PeeWee started his career in the oil field back in 1953. In 1967, he bought Skelly's Service Station. When he decided to sell the service station in 1979, he started watching oil rigs and worked as a driller. In 2013, PeeWee decided to retire. He enjoyed getting to hang out and have his coffee at the local donut shop, BancFirst, Rupp's, and the Bray Store. PeeWee also witched water wells and helped his sons on the farm in his free time. He even raised a community garden. PeeWee loved his family and always jumped at the chance to spend time with them. His absence will be felt greatly throughout the community and PeeWee will be missed by all.