To share your memory on the wall of Alvin Blundell, sign in using one of the following options:

Funeral services will be held at 2:00 PM, Monday, December 21, 2020, at First Baptist Church in Marlow, with Rickey Scott and Kenny Howell officiating. Burial will follow in the Marlow Cemetery under the direction of Callaway-Smith-Cobb Funeral and Cremation Services in Marlow.

Alvin was born Tuesday, August 13, 1943 in Marlow, to Van Junior Blundell and Stella Marie (Wilson) Blundell. He was a graduate of Altus High School, and earned his Associate's Degree from Altus Junior College. He was also a proud member of the United States National Guard for 6 years. Alvin met Mary Lou McKay, and they married on June 6, 1969 in Altus, and celebrated 42 years of marriage before her passing in 2011. Alvin and Mary decided to relocate to his hometown of Marlow in 1980, where they would raise their 4 children. There wasn't a bigger Sooner's fan around. Didn't matter the sport, if it was OU, he was watching and cheering them on. He will be remembered for his hard work ethic and how he worked every day of his life, and the great amount of love he had for his family. Alvin will be deeply missed.

Alvin was preceded in death by his wife and parents.

Honorary bearers will be Kenny Thompson, Charlie Kidd, and his grandchildren.

Receive notifications about information and event scheduling for Alvin

There are no events scheduled. You can still show your support by sending flowers directly to the family, or planting a memorial tree in memory of Alvin Junior Blundell.
Plant a Tree

We encourage you to share your most beloved memories of Alvin here, so that the family and other loved ones can always see it. You can upload cherished photographs, or share your favorite stories, and can even comment on those shared by others.

Posted Dec 21, 2020 at 02:36pm
Wishing you peace to bring comfort, courage to face the days ahead and loving memories to forever hold in your hearts.

Posted Dec 18, 2020 at 09:30am
Dawn, Please accept our most heartfelt sympathies for your loss... Our thoughts are with you and your family during this difficult time.

Flowers were purchased for the family of Alvin Blundell. 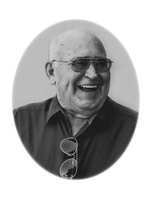