To share your memory on the wall of Curtis Hobbs, sign in using one of the following options:

Provide comfort for the family of Curtis Hobbs with a meaningful gesture of sympathy.

Funeral Services will be held at 2:00 PM, Monday, January 13, 2020, at the Church of Christ in Rush Springs, with Kevin Warden and Larry Sweat officiating. Burial will follow in the Marlow Cemetery under the direction of Callaway-Smith-Cobb Chapel in Rush Springs.

Curtis was born Thursday, August 12, 1954 in Dallas, TX, to Clyde Franklin and Geneva (Sweat) Hobbs. He graduated from Garland High School in Texas and had lived in Rush Springs for the past 43 years. Curtis married the love of his life, Debra McCarty in Rush Springs on September 8, 1976; they were married for 43 wonderful years before his passing. Curtis worked as a truck driver for ODOT for more than 30 years and had worked for Grady County District 3 for almost 5 years. He took great pride in his job and loved everyone he worked with. Curtis enjoyed steer wrestling, fishing, and hunting. He liked to cook and could make the best banana pudding. Curtis loved spending time with his family especially his grandchildren. He volunteer at Camp Cavett with his son, Roy. Curtis was the president of the Rush Springs Riding Club and a member of Church of Christ of Rush Springs.

Survivors include his wife, Debra Hobbs of the home, 2 sons, Michael Hobbs and wife June of Cement, Roy Hobbs of Rush Springs, 3 daughters, Amanda Hobbs of the home, Brandy Teague and husband Gary of Bridge Creek, Cassie Chatterton of Duncan, grandchildren, Nathan, Cody, Bailey, Summer, Austin, Daniel, and Orion, great-granddaughter, Bryanna Whan. He is survived by his mother, Geneva Hobbs of Hinton, a sister, Sandra Stepp and husband James of Hinton, as well as numerous nieces and nephews.

Curtis was preceded in death by his father.

We encourage you to share your most beloved memories of Curtis here, so that the family and other loved ones can always see it. You can upload cherished photographs, or share your favorite stories, and can even comment on those shared by others.

Posted Jan 10, 2020 at 10:01am
We are so sorry to hear about the passing of Curtis. We will miss him dearly. Camp Cavett won't be the same without him.

Flowers were purchased for the family of Curtis Hobbs. Send Flowers 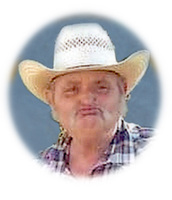