To share your memory on the wall of Keenan Barrington, sign in using one of the following options:

Funeral services will be held at 2:00 PM, Thursday, February 25, 2021, at the Glory Bound Church, with Rev. David Woods officiating. Burial will be in the Marlow Cemetery under the direction of Callaway-Smith-Cobb Funeral and Cremation Services in Marlow.

On the morning of February 16, 2021, our precious son, Keenan gained his wings. Keenan had a light around him that nobody could resist. He never met a stranger and he never forgot those he met.

Keenan got his first guitar from his Papa on his 5th birthday, that was the beginning of his musical journey. What a journey it has been. He could play that guitar in his sleep. One of his greatest pleasures and passions was to play with his Papa, they were like brothers instead of grandparent and grandchild. They could almost read each others minds. Keenan had many picking buddies, Darin, Cody, Kody, Joe, Lloyd, Josh, and so many more. Another one of Keenan's passions was fishing. He loved to fish with his brothers, Cody and Zach, and could do it with his eyes closed. He always said he caught more than anybody!! Keenan was one of those guys that could do anything he put his mind to. He was an awesome mechanic, and if it had missing parts, he could fix it. He loved to cook on the grill or smoker, and he just recently learned to cook in the crock pot. He would text his mom and sister Casie about recipes, especially Nana's mashed potatoes. Keenan loved to play pool, he was such a goofball. He wanted to make everybody laugh, and he did! All the time!! He loved his job at Flex N Gate. He would send me pictures of things he was working on and was so proud of what he was doing. Above all, Keenan loved his babies, Kade, Kylie, and Kayler. He loved cooking for them and getting them ready for bed. He would take them for rides on the lawnmower and take them fishing, and loved looking in their eyes, and giving them hugs and kisses. Keenan had a close relationship with his Mama, Dad, sister Casie, and brothers, Cody and Zach. He loved his nieces and nephews, his brother-in-law Lee, and he loved his Papa and his Grandma. Keenan loved everybody and wanted to help everyone he could.

Keenan leaves behind his 3 children; Kade, Kylie, and Kayler, parents, Keith and Lorie Barrington of Marlow, his Papa, Lloyd Phillips, and grandma, Joyce Barrington of Marlow, sister, Casie Dorman and husband Lee and their kids, Kelby, Sadie, and Lexi of Rush Springs, brother, Zach Barrington and wife Davi and their children, Ryan Barrington of Comanche, Chevelle Barrington of Marlow, Tailer, Aubrey, Jacklyn, and grandbaby Blake, all of Duncan, and brother Cody George and wife Cheyenna, and their daughter Braelee of Central. Keenan also leaves behind the love of his life, Melissa MacRoberts of Ada, OK. Melissa had Keenan hiking, running, doing yoga, and eating right, I mean better!! He called her food "air" and would say "Mom, you're going to love this one." Keenan also leaves behind his close buddy, Kody Thompson. Also survived by Keenan is "HIS UGLY RED TRUCK." Keenan would have turned 40 on March 24th.

In lieu of flowers, donations may be made to the family to help with Keenan's burial expenses.

To send flowers to the family or plant a tree in memory of Keenan Barrington, please visit our Heartfelt Sympathies Store.

Receive notifications about information and event scheduling for Keenan

We encourage you to share your most beloved memories of Keenan here, so that the family and other loved ones can always see it. You can upload cherished photographs, or share your favorite stories, and can even comment on those shared by others.

Posted Feb 25, 2021 at 11:59am
Keenan was one of the kindest and most loving people that I have ever known and regardless of how bad things seemed he could make you smile. I love him and will miss him! My heartfelt condolences to all who knew and loved him, the world is a lesser place without him.
Toby and Crystal
Comment Share
Share via:
RP

Posted Feb 22, 2021 at 10:10am
Such a great talent taken way too soon. Rest in peace, Keenan. I pray the LORD will use all that you left behind for His glory. As you wrote in your song, "You are forever His." Much love, robin
Comment Share
Share via: 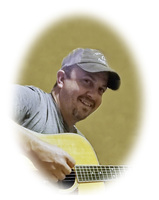